26 Fed ’20 The Aus ripped into McCormack for Damien Drum MP, with real suggestions of malfeasance:

He said the government recently announced a $50m Business Investment Fund to provide “tailored support to eligible providers grappling with financial ­issues in the future”.

25 Feb ’20 NSW National Parks wants to increase fuel-reduction burning “around homes, properties and environmental assets”.  Think about it:  these are the very areas that might be feasible to apply Aboriginal landcare models to, as a start.  The RFS model is broken along with the National Parks’, will Kean and Berejiklian “get it”?

22 Feb ’20 Herald silent but van Onselen has guts and values:

… it is incumbent on all of us not to let the matter rest because time since the rort happened continues to pass, which is the government’s entire political strategy to wash over this disgrace.

The point is, Crowe says the PM is “proceeding effectively”.  Crowe, explain yourself,  are you invested or naive? (See adjacent page.)

19 Feb ’20 RFS brilliant, Herald too, yet where is the native landcare model?  Will the Royal Commission succeed?!? 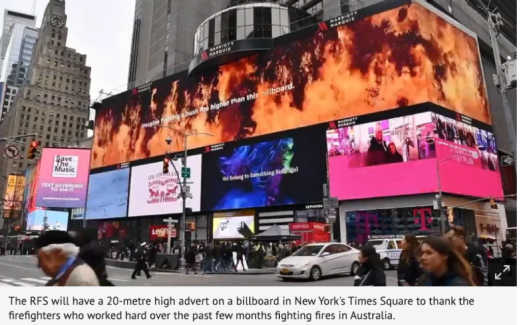 With news that a handful of NSW south coast businesses are set to close, state Roads Minister Andrew Constance came out swinging:

“Instead of being obsessed about this surplus, which is all our money, actually put it where it’s needed to help Australians with a very serious problem.”

Constance told 7 News he wants the small business recovery scheme to be redefined as a grant to help all firms affected by the fires, not just those that are damaged.

“It is one area of the recovery which is a massive hole and it’s caused by Canberra.”

20 Feb ’20 NSW halts Forestry privatisation, pretty obvious, what did their risk analysis in the due diligence process look like?

Around the country — from NSW to Queensland, Victoria to South Australia — volunteer firefighters contended with trucks that lacked the latest emergency sprinkler systems and heat-­resistant materials, or did not have roll bars and protection against falling tree branches.

The Weekend Australian can reveal that a funding plea from the NSW Rural Fire Service to upgrade thousands of dilapidated and outdated trucks has been sitting idle with the NSW government for months while volunteers have been battling the fires.

After the fire danger was finally declared under control this week, attention has shifted to … a litany of shortfalls, with organisations running on a shoestring at times, often hampered by a lack of resources already in use by rival and paid firefighting services.

12 Feb ’20 It’s all un-peeling for Morrison as the de-skilling associated with Tin Soldiers in key posts – unimpressive persons indeed in some cases – and greedy burghers especially in the Nats, are causing

Journos are slow on the uptake of wider connections.  They are there to be seen in my work but generally not theirs.

Dennis Shanahan has filleted the Nats and Josh nicely, Josh of course being a very big target after three corrupted budget episodes:

Morrison was forced to make the humiliating, plaintive and often-disregarded “call for unity” directed at the Nationals in the Coalition party room meeting, and Josh Frydenberg, as deputy Liberal leader and Treasurer, backed him

The Gaetjens catastrophe has come on nicely – the Senate is going to mothball Mathias Cormann.

To the PM and senior politicians this morning:

Subject: Morrison disintegrating – advices out to MPs and journalists
PM and Dr Kunkel
Nothing is working but everything is worsening.
Here is this morning’s send which embeds links to Denis’s column in The Aus (he and I go back to the ’80s) and two webpages which tear you apart.
The book is a clusterduck for you.
Stop this stupidity and evil, please

You are aware that I have grievous issues with the Federal and NSW Governments which I have to pursue.  The attached article is a pointer to the damage my revelations ill have re Scott & Josh – Budgets MYEFO  “$100 billion over 10 years”

1 McCormack – endless blunders and now 286 days of breaking of a thrice-made promise to Tim Fischer and me – what a bastard act
– Angus, Tim and others on standards and blunders

Please stop this ugly mess.  Read the article (above), think.

The fact that Australia has been emerging from an Ice Age has been posted here previously, on the adjacent page.  No one seemed to pay attention.

The implications were implied but are now stated, in line with Tweets send to the PM and Deputy PM (with similar to journos who slammed their doors in my face) – the PM and Deputy PM and their coal mates were grossly irresponsible in ignoring the fire chiefs and are accountable for significant damage in the current fire season:

“As I’ve said and will now pound home is that Australia is in a warming cycle:

Next I publish the normalised estimates of number of children killed since Dec ’15 (1,518 days since Turnbull ignored my offer of win-win negotiation), I say to all and sundry, this is unacceptable on the part of

Quote from Dr Karl but there are plenty of expert texts, and frankly, every school kid should know this,  but there are dozens of other refs:

As an example of how complex the Ice Ages are, the Interglacials (the short periods between the Ice Ages) over the last million years are not all identical. For example, the last Interglacial was a lot warmer. About 126,000 years ago, the oceans were about 3-4 metres higher, and warmer. We know this because there were coral reefs south of Perth). [NB around Marseilles, the rise in ocean level over some 50,000 years is c 60 metres – Xavier-Marie Bonnot]

At the moment, we are roughly 18,000 years into the current warm Interglacial. But for the 80,000-or-so years before that, our ancestors lived in a much colder world, with vast areas covered by ice.

For those who have limited understanding, that means that Australia is warming regardless of carbon emissions.  Your bullshit about firies, farmers and others was despicable.

Our responsibility to the planet and future generations means we must take carbon futures very seriously, which Berejiklian does not do – her base-load-fuelled metros and trams were not compared by her with bio-fuelled buses as recommended by Greiner and me.

To say the Deputy Prime Minister is living in a political bunker is an understatement.

He forgot the little things like lack of leadership, ethics and Budgetary credibility (as Josh is already scribbling his speech).  Morrison is desperately throwing snow over his blunders, as PVO has written – PVO should be defending democracy.

PVO knows all this so why is he stumm?

The adjacent page deals with the little-big story that started in September ’20, which was a month earlier than the 2013 fires in the Blue Mountains (Victoria’s 2009 Black Saturday conflagration was in February).

On 6 Feb ’20, Alexandra Smith wandered into the minefield of political advantage.  She wrote,

There are ironical moments such as Constance’s “brown” attitudes to continental warming conflicting with the strong contrary views of firies and farmers;  and Smith not referring to merit.

Berejiklian is not now showing the callous aggression she did to the good folk of George Street in Sydney’s CBD, North Parramatta and Newcastle with their atrocious tram debacles, Anzac Parade and Randwick Junction with the ideological tram and dysfunctional bus changes, and this citizen whom she has shamelessly plagiarised.

Constance, Perrottet, Berejiklian, Kean and the donkey’s aunt have major charges to answer, some here – https://sydneyimprovementpolitics.com/bairdijiklian-big-lies.

But the Herald has not yet discovered the realpolitik of the good and the bad, the performances, and the evil of plagiarism.

every time we don’t act on corruption, we effectively endorse it

7 Feb ’20 Alexandra Smith again – six farmers in NSW’s north are taking legal action over negligent treatment of fuel loads in the forests where cattle are no longer allowed to graze.

Barilaro had threatened to resign, to exercise more influence, on several occasions, but the reality is he made largely negative contributions on greyhound racing reform, keeping Baird to his promises over the regional share of poles and wires privatisation, gaining a share of proceeds from the Snowy Hydro scheme sale, the future of Newcastle Port, the placement of an air freight hub, and water charging and allocations.