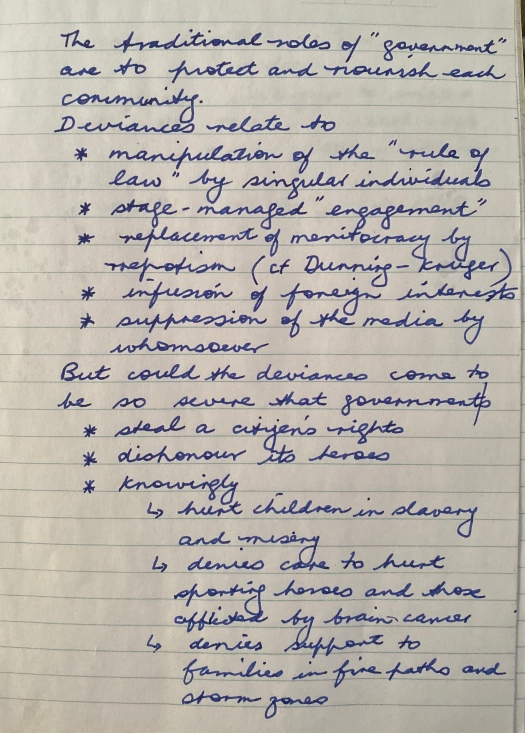 I had been working with Tim Fischer AC for the last two years of his life.  This email was inspired by his passing and my intention to honour him in the way he would best appreciate, through actions rather than words, in ways that improve communities.

As the world’s kids were striking on 20 September, not one policy, program or project addresses critical challenges to intergenerational equity.  Harming – even killing – children and families in firepaths unnecessarily are in the mix here, as will be explained.

Tim has been lauded as a thinker and doer, by PM Morrison and Deputy PM McCormack, and he remained so to his death.  Tim was upset at the plagiarism and locked doors I have experienced from Federal and NSW Coalitions and the Nationals’ leadership group.  Unprecedented levels of waste on poorly-designed projects and through broken due diligence systems feature.

To show that this is a real issue, here are most of the causes I intend to fund if I am paid fairly for the Intellectual Property that was stolen:

* Indigenous women and men accessibility & facilities was added, all to be via NRL,

Killing children, hurting bushfire families, preventing grants to Police Legacies and NRL charities, hurting my family and me and NSW ….

The current federal and state governments and their immediate predecessors, and associated cabals and political and ideological lobbies and thinktanks, have wrecked the foundations laid by previous “nation-building” generations and heroes, including Menzies and Tim.  They rejected me but stole what they wanted, without acknowledgement or payment.

They closed their ears and doors against my “j’accuses”.

They have now “hit the wall” and cannot proceed without the solution-sets I developed as part of my “Save Sydney” suite, over some 10 years.

They have snookered themselves:  the solutions are locked-up under copyright and they have befouled the copyright context.

The only way out is to observe “Menzies” values, finally.

Current ministers who have deliberately fostered political cadres, suppressing independence and expertise;  and excluded genuine problem-identification, risk analyses, and solution/engagement processes, cannot now be trusted to redress and correct the deceits and blunders of their administrations.  They especially include the main portfolio minister and Deputy PM, Michael McCormack MP, who lied to Tim and me and is undermining the PM’s electorate:

Tim invited me to the opening of his Gallery in Lockhart where he prodded the Deputy PM to talk to me.  Michael and I had a chat, I emphasised my intent to fix Inland Rail, the ports and Sydney, and told him of my hardship.  He promised three times that he would talk to me, but that was 165 days ago and nada.  (Michael had appointed a spinmeister as his Chief of Staff rather than an expert/ economist problem-solver.)

The Governor of the Reserve Bank was overly-optimistic about the Fed “$100 billion over 10 years” as that is $50 billion short or rising to $300 billion if promises are to be kept.  The 13 high speed train proposals given consultancy money are smokescreens to hide RG’s widely-publicised Mandurah scheme for sooner, cheaper and more flexible services which would enhance existing towns, which the CLARA con (waste of $8 million) would damage.